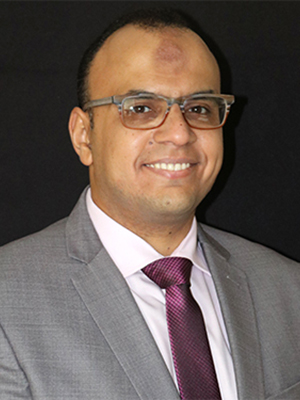 Dr. Islam Mohamed is an Assistant Professor in the Department of Pharmaceutical & Biomedical Sciences at California Northstate University College of Pharmacy (CNUCOP). Dr. Mohamed received his Bachelor of Pharmacy and Pharmaceutical Sciences from the College of Pharmacy, Ain-Shams University, Egypt, in 2005. After which, he joined the Department of Pharmacy Practice and Clinical Pharmacy at the Faculty of Pharmacy, Misr International University in Egypt as a teaching assistant, where he taught multiple classes for Pharmacy students including pharmactherapy and advanced therapeutics, clinical pharmacology, drug information and drug interaction courses. In fall 2008, he was awarded a full Fulbright Scholarship for his MS in Neuroscience from State University of New York at Buffalo (SUNY Buffalo). In summer 2014, Dr. Mohamed earned his PhD in Clinical and Experimental Therapeutics from the College of Pharmacy, University of Georgia. His pre-doctoral research was focused on the interaction between obesity and insulin resistance in retinal microvascular degeneration. 2014-2017, Dr. Mohamed joined the Division of Cardiology, Emory University School of Medicine, in Atlanta, GA, where he finished his post-doctoral training and also practiced his Pharmacy Intern Training at Emory University Hospital Midtown, towards earning his registered Pharmacy license (RPh). His Post-doctoral research focused on the role of vascular micro-RNAs in the development of atherosclerosis using a novel surgical model for acute induction of low magnitude turbulent shear stress. Dr. Mohamed was awarded the prestigious American Heart Association Fellowship twice; at both the Pre- and Post-doctoral levels. In addition, his research efforts resulted in a total of 9 original research articles and more than 20 abstract and oral presentations in international research conferences. His current research interests involve the micro- and macrovascular complications of obesity, diabetes and the role of vascular micro-RNAs in shear-stress induced atherosclerosis.